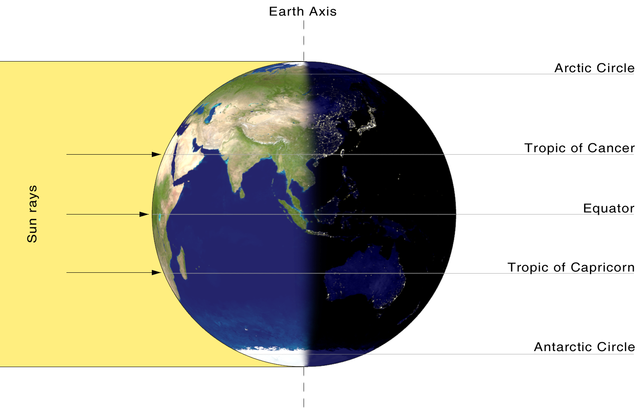 An equinox occurs twice a year, when the tilt of the Earth's axis is inclined neither away from nor towards the Sun, the center of the Sun being in the same plane as the Earth's equator. The term equinox can also be used in a broader sense, meaning the date when such a passage happens. The name "equinox" is derived from the Latin aequus (equal) and nox (night), because around the equinox, the night and day have approximately equal length.

An equinox happens each year at two specific moments in time (rather than two whole days), when there is a location (the subsolar point) on the Earth's equator, where the center of the Sun can be observed to be vertically overhead, occurring around March 20/21 and September 22/23 each year.

Although the word equinox is often understood to mean "equal [day and] night," this is not strictly true. For most locations on earth, there are two distinct identifiable days per year when the length of day and night are closest to being equal; those days are referred to as the "equiluxes" to distinguish them from the equinoxes. Equinoxes are points in time, but equiluxes are days. By convention, equiluxes are the days where sunrise and sunset are closest to being exactly 12 hours apart.

The September equinox marks the first day of Mehr or Libra in the Iranian calendar. It is one of the Iranian festivals called Jashne Mihragan, or the festival of sharing or love in Zoroastrianism.

In Korea, Chuseok is a major harvest festival and a three-day holiday celebrated around the Autumn Equinox.
The Mid-Autumn Festival is celebrated on the 15th day of the 8th lunar month, oftentimes near the autumnal equinox day, and is an official holiday in mainland China, Hong Kong, Taiwan and in many countries with a significant Chinese minority. As the lunar calendar is not synchronous with the Gregorian calendar, this date could be anywhere from mid-September to early October.

The traditional harvest festival in the United Kingdom was celebrated on the Sunday of the full moon closest to the September equinox.

The September equinox was "New Year's Day" in the French Republican Calendar, which was in use from 1793 to 1805. The French First Republic was proclaimed and the French monarchy was abolished on September 21, 1792, making the following day (the equinox day that year) the first day of the "Republican Era" in France. The start of every year was to be determined by astronomical calculations following the real Sun and not the mean Sun.


One effect of equinoctial periods is the temporary disruption of communications satellites. For all geostationary satellites, there are a few days around the equinox when the sun goes directly behind the satellite relative to Earth (i.e. within the beam-width of the groundstation antenna) for a short period each day. The Sun's immense power and broad radiation spectrum overload the Earth station's reception circuits with noise and, depending on antenna size and other factors, temporarily disrupt or degrade the circuit. The duration of those effects varies but can range from a few minutes to an hour. (For a given frequency band, a larger antenna has a narrower beamwidth & hence experiences shorter duration "Sun outage" windows.)